The final of the Army Inter-Corps Cricket Championship has been decided by the narrowest of margins. The battle between the Royal Electrical and Mechanical Engineers (REME) and the Royal Engineers saw both teams struggle at the crease in a low-scoring but enthralling final. The wicket of REME opener Tommy Jones was the first to fall after the Royal Engineers had put his side in to bat. Jones then went after just the second ball of the contest and it set the tone for the match. A combination of tight bowling and superb Sapper fielding prevented their opponents from finding their stride. The REME were two down by the time Army first-team skipper Jonathan Boynton was in the middle. Even he was restricted to running singles, with boundaries at a premium – but the captain did his best to go on the attack. At the other end, Liam Fletcher was crafting out some runs as he and Boynton took the REME past the 100-mark.

You can see video footage courtesy of Forces TV here:

A short while later, the partnership was broken as Boynton was out for 34, caught by Joe Johnson from Leo Beal’s bowling. 114-3 quickly became 116-4 as Fletcher was undone by the spin of Sapper skipper Ross Dearden. That meant frustration for Fletcher, who was out one shy of his half-century. The departure of the REME side’s leading lights was the catalyst for a collapse as the Sapper bowlers kept up the pressure. A neat caught and bowled from Beal accounted for Stan Pugh, who reluctantly returned to the pavilion, while Gary Nash didn’t hang around as the REME slipped to 124-6. REME captain Tom Lester added just 20 before he too was on his way, after slick glovework from wicketkeeper Connor Reed claimed another scalp. Johnson picked off Dan Pirie at the death to reduce the REME to 161-9. By the end of their 50 overs the REME amassed just 163 runs but in the context of the clash, crucially, it was for the loss of nine wickets. The engineers got their reply off to a steady start and with some fumbles in the field aiding their run chase, they made inroads. 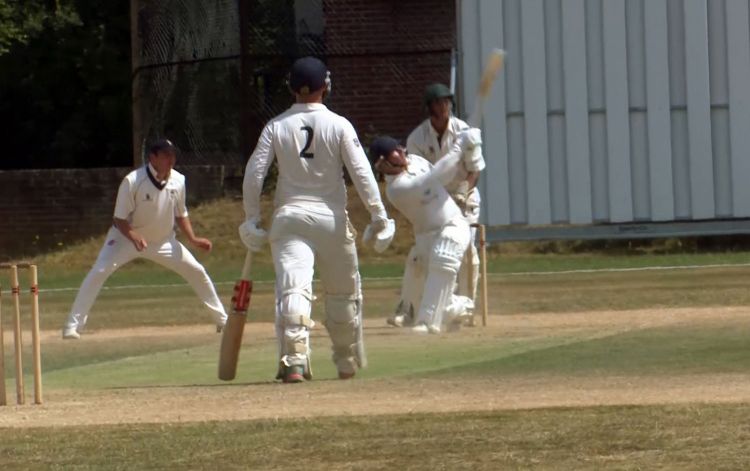 But with 43 runs on the board, Sapper talisman Reed gifted Fletcher a simple catch from his own bowling and he was gone for 26. From there on a steady stream of wickets followed. Jones did well to remove Steve Flannery as the engineers floundered at 47-2. The loss of a third wicket saw Dearden at the crease. Initially, he looked at home, much to the engineers’ delight. But he went cheaply as Roland Armstrong took a neat catch from the bowling of Lester. Despite the steady fall of batsmen the engineers still looked favourites to win but two wickets in two balls from Nash swung the contest the REME’s way. In a frantic finale, Ned McLelland struck a four to see the scores level. Two balls later and needing just one run for victory, he was out. There was initially some confusion before the REME realised they’d won the cup by the tightest of margins. The skipper, Corporal Lester, told Forces Network:

“I’ve never played in a game that’s ended as close as that. When the last catch got taken I didn’t even know whether to celebrate or not!”

“Credit to the boys, it was an absolutely cracking game of cricket, which is the closest I’ve seen.  It’s the first time we’ve got to the final… so I’m just really, really proud of what the boys have achieved this season, regardless of the outcome, as devastating as it is.”